This original chainmaille weave created by Rebeca Mojica was originally published under the name "On the Edge Bracelet" in Wirework Spring 2013.

Colored rings along the edges give new life to the Half Persian 3-in-1 (HP3-1) weave. The HP3-1 weave is actually one half of the round Full Persian 6-in-1 weave, hence its name. HP3-1 can be tricky to get started, but once you master it, the weave flies along!

Fun Fact from Rebeca: "The Zeela bracelet variation shown here is named for my cat. As an avid cat person, I'd always wanted to name a weave after one of my cats. Zed and Apollo were already taken as weave names, so this weave is named after Apollo's daughter, Zeela. However, she seems rather unimpressed by the honor …"

Building Block Prerequisite:
Proficiency in at least 3 chainmaille weaves, including Half Persian 3-in-1.  Be sure you have mastered HP3-1  before attempting this project. 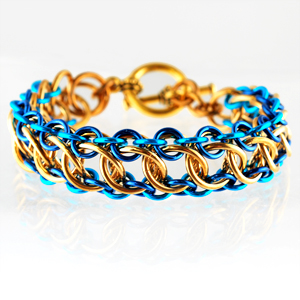 Download a PDF
Buy on Etsy
< Previous Pattern | Back to Top