Jens Pind 5 is an incredibly complicated weave to begin, because it doesn't lock into place until you've added the 10th ring. This means you need to hold 3, 4, 5 and finally up to 9 rings at very precise angles to one another—not an easy task even for dexterous fingers!

JPL5 is constructed similarly to Jens Pind (also known as Jens Pind 3, because it has 3 different planes of rings). However, instead of going through the last 2 rings and orienting the new ring like the 3rd one back, you weave a new ring through the last 4 rings and make it look like the 5th one back. That's why it is called JPL5—it has 5 planes of rings.

Tip: Use a starter in a contrasting metal color to what you'll be weaving with, and cut off the starter when your piece is as long as it needs to be. Reuse your starter for next time!

** NOTE: No instructions are currently available for this design. This is an archived page intended to provide eye candy and inspiration. **

Rebeca's Note: As far as I know, this weave came about in 2004 when fellow mailler Zlosk and I were speculating about the possibility of doing Jens Pind with increasing numbers of rings. I'd tried Jens Pind 4 (also known as Criss-Cross), but didn't like it because the even number of planes meant that there was a "seam" along one side of the weave. In order to have a perfectly symmetrical weave, there would need to be an odd number of planes. So, the concept of JPL5 was born. Zlosk rendered a model on his computer, which we used to help construct the original weave. I failed for many hours, but Zlosk was ultimately able to do it. Months later, at a chainmaille gathering, I sat down to conquer this weave once and for all, and finally: success at last! Woo-hoo! My enthusiasm was short-lived, however, as Zlosk decided to taunt me with computer renderings for 7- and 9-plane versions of Jens Pind.... 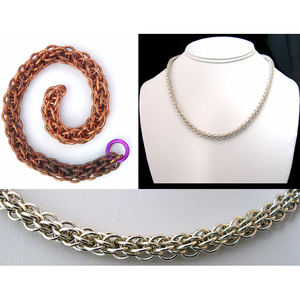