As seen in the February/March 2012 issue of Step by Step Wire Jewelry magazine.

Always a fan of spiked jewelry, Rebeca developed this weave when she couldn't find an already-existing chainmaille weave that was flat on one side, and spikey on the other. After playing around with the construction of Celtic Visions, she came up with this pattern and named it in honor of its "parent" weave.

Prerequisite: Proficiency in at least 3 chainmaille weaves, including Celtic Visions.

We sell kits for this project!

Available while supplies last. Visit the Blue Buddha Boutique Etsy shop to check out the current selection of kits. 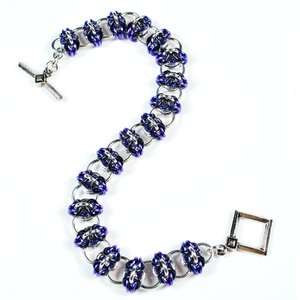 Download a PDF
Buy on Etsy
< Previous Pattern | Next Pattern >